What is IoT: Its use in the 21st century.

What is IoT: Its use in the 21st century. 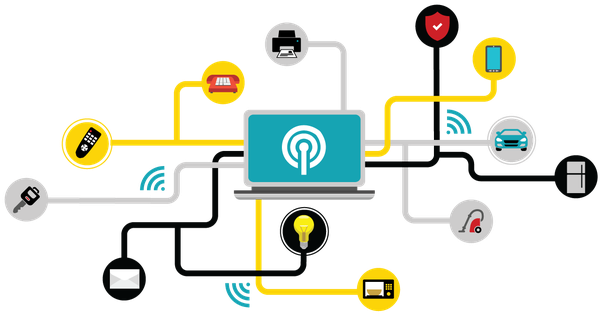 There was a lot of talk going on in the tech labs of a thing called IoT, the conversations would happen behind closed walls and even a peak of the conversation would leave the general man baffled by the technical jargon. It was after tests were done that this “creature” found its way into the market as a numerous range of products available to the general man off the shelf with a set of instructions for setting up and they called it IoT.

Dear reader, in this article I will expound on what IoT is in the simplest of language to help you understand what it’s all about. Read every line in order not to get baffled next time “IoT” pops up in class, in a meeting, conference or on TV, yeah?

The acronym IoT stands for Internet of Things, yes that’s just what it stands for. IoT is a network of physical objects: vehicles, machines, home appliances, smart phones and more that use sensors and a link for connection called an API to connect and exchange data over the Internet without requiring human-to-human or human-to-computer interaction.

Let’s take a quick example to help you better understand; say you work for 12 hours a day, you live alone in an apartment. One day when you get home you realise that you don’t have anything in the fridge to cook because you forgot to buy.

Now here is where IoT comes in, think of an IoT enabled refrigerator which keeps a track of all food items available in your fridge. When it notices that you are out of meat, veggies and milk, it automatically orders the items online and makes the payment for you. If you forget to buy food, your refrigerator will do the shopping for you. Isn’t this fantastic?

The internet started with a simple idea of connecting computers together to share data in various ways, since then, people have started buying smart devices that can connect to the Internet. That’s the basis of the term Internet of Things (IoT). The Internet of Things extends internet connectivity beyond traditional devices like desktop and laptop computers, smartphones and tablets to an ever-growing network of everyday things that utilise embedded technology to communicate and interact with the external environment, all via the Internet. It’s the inter-networking of physical devices (“connected devices” and “smart devices”) that enable these objects to collect and exchange data.

IoT products are being developed everywhere. Companies like INTEL, LG, Microsoft too many start-ups are working on this technology. This technology is being researched for areas like home automation, medicine, agriculture, education and many more.

IoT platform is a cloud software/platform that connects to the sensors, gateways, end-user applications or any other physical thing that has a network connectivity and is an integral component of IoT architecture.

How does it work?

It isn’t possible to simply connect a device to the Internet and have it miraculously start communicating with other connected devices. The Internet of Things requires that you have the basic pieces in place.

The stage 2 systems often exist in close vicinity to the sensors and actuators.

For Example: A pump might contain a series of sensors and actuators that feed data into a data aggregation device that also digitises the data. This device might be physically attached to the pump. An adjacent gateway device or server would then process the data and forward it to the Stage 3 or Stage 4 systems.

The ability to network embedded devices with limited CPU, memory and power resources means that Internet of Things (IoT) finds applications in nearly every field. Below are a few examples:-

However, the application of IoT is not only restricted to these areas. Other specialised use cases of IoT may also exist, share some that you know or have seen with us in the comment section.

This is pretty much about it on ” What is IoT” without getting too much into technical details. A lot of stuff i left out from this article that may apply to individuals who inspire to work with IoT. Watch out for the next article covering the future of the world with IoT unpacked as well as a fun space where we uncover the multiple times you may have used IoT without realising it. See you on the next one reader and remember to drop questions and contributions in the comment section.